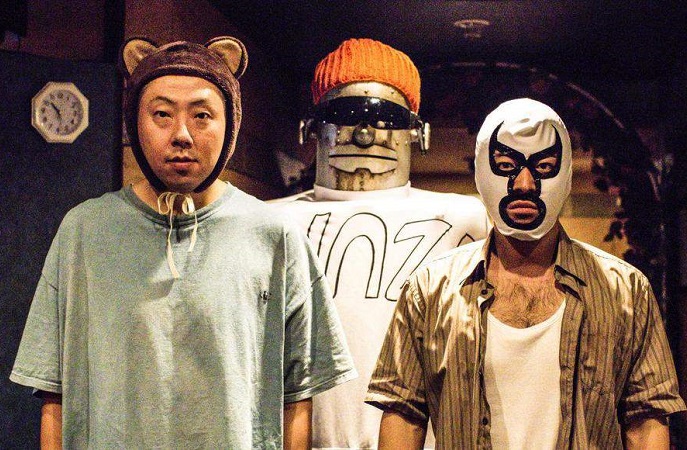 A Yakuza bath house, three wacky guys and a robot, Tokyoites taking the piss, a murder mystery and a melodrama. Five films I saw at the Japan Camera film festival in Rotterdam, that you might want to catch this coming weekend in Amsterdam.

The Camera Japan film festival has its 14th edition right now and only since last year do I know of its existence. And I am a Japanophile who loves Japanese movies (I watch one almost every day). The festival has two editions, one in Rotterdam and one in Amsterdam. The Rotterdam edition was last Thursday until Sunday. I picked five movies from a finger-licking good program.

I started with Another World by Sakamoto Junji (last name first, as the Japanese respectfully would like us to observe), also showing in Amsterdam this coming Sunday. Sakamoto, of whom I had never before seen a film, seems to alternate between action movies (even a Zatoichi film, but not with the great Katsu Shintaro) and dramas. Another World is a slow-paced drama, brimming with atmosphere.

It has three great actors in the main roles of three old school friends, now approaching middle age, reuniting after one of them, who served in Japan’s Self Defense Forces, returns to their sea-side, mountain-backed home-town. The other two never left town. One struggles to keep alive the charcoal business he took over from his long deceased father, the other runs a second hand car business with his alcoholic father.

The focus is mainly on the charcoal maker, played by Inagaki Goro, who has a son who is bullied at school and his wife, a household drudge whom he doesn’t appreciate enough. She is played by Ikewaki Chizuru.

Wintery atmosphere
Now all actors in this movie are wonderful, and far too little screen time is given to the charismatic Shibukawa Kiyohiko, who has a trickster-like charm and who plays the car-dealer, but the real scene stealer here is Ikewaki as the worn-out, chronically over-exploited wife and mother, who nevertheless never loses her fighting spirit and her natural authority over all the other characters. Ikewaki plays her by looking and being as real as she can, a cuddly but somewhat cranky housewife containing a core of swirling lava.

Much time in the movie is spent observing Inagaki making his charcoal in long hypnotic scenes, and the movie breathes a wintery atmosphere. Hot and cold are constantly at play in this wonderful movie, as inseparable dance-partners, alternately covering and freeing the characters, who are constantly covering each other with blankets, a touching metaphor.

The next day I saw Melancholic, director Tanaka Seiji’s first film, showing in Amsterdam next Friday. It’s extremely low budget – I don’t remember whether the guy who introduced it said it costed 25000 euros or 2500, and I wouldn’t be surprised if it’s the latter – which was shot during weekends, when Tanaka was free from his day-job. The movie won several awards already.

Tanaka certainly is a very talented director, impressively inventive concerning the limited possibilities he has with such a small budget. So he suggests a lot instead of showing it, without ever leaving the viewer with the feeling of being had.

Mediocre acting
The movie, which is about a young man working at a bath house which is used at night by yakuza for the killing and disposing of their competitors, starts very strong with the exposure, capture and execution of a mobster who hustled his boss, a nail-bitingly tense scene. But it gets clumsier and more far-fetched as the story progresses, with very mediocre acting at best, especially by the actor playing the main role, Minagawa Yoji, who looks at his love interest, Yoshida Mebuki, as if he’s in a panic, wondering how long it will take until she realizes he just farted. Mebuki seems to be the closest to real acting, by the way.

I will definitely go see Tanaka’s next film, with a bigger budget, because he might be the next Miike Takashi, but Melancholic is the least impressive of the five movies I saw this (long) weekend. I even dozed off a few times.

Saturday night was for Fly me to the Saitama by Takeuchi Hideki, which I went to see with my girlfriend, who loves Japan and things Japanese, but is not as fanatically a Japanophile as I am. I was a little concerned whether she would like this absurdist, typically Japanese comedy about a the animosity between the snobbish Tokyoites and the inhabitants of the neighboring city Saitama, who are plagued by an inferiority complex vis-à-vis their much, much cooler and self-confident sister city.

But she loved it, as did I, and I think the key is in the grotesquely hysterical and often tasteless hyperboles Takeuchi rapid-fires at the viewers, not giving them a second to think about what outrage they have just been exposed to. Takeuchi does not hold back, alternating a great deal of superb satire with corny, cheesy, childish, insipid, stupid, plain awful jokes, just everything he could come up with, throwing it at his audience, and it is hilarious.

Hilariously funny
Two travelers in a train abruptly coming to a halt as soon as it enters the outskirts of the city, because a herd of gnus is crossing the railway, after which we see some old footage from an African Nature documentary of a giant herd of gnus crossing a river, Takeuchi does not feel himself above that. When one of the main characters enters Chiba, another suburb of Tokyo, it is a large primordial forest with a pterodactyl soaring over her head. It is hilariously funny because it is so utterly stupid.

If you don’t know what the deal is with the antagonism between Tokyoites and Saitamese and the rivalry between Saitama and Chiba and the jokes Tokyoites make about Saitamese en Chibanese and why and how, this movie is your crash course in Japanese interprefectural relationships. And anyway, the same movie could have been made about Amsterdam and the rest of The Netherlands, London and Northampton or Birmingham and New York and California and the so-called fly-over states, I suppose, with more or less the same jokes. It’s a pretty universal theme.

It is clear that all the actors had a great big outrageous ball working on this movie, which keeps pressing for laughs until the very last end credit. What a feast! You can see it this Saturday in Amsterdam.

We started our Sunday with moodier fare in the shape of Red Snow by Kai Sayaka, showing in Amsterdam on Sunday. I chose this film because it was by one of only two female directors featured on this year’s Camera Japan program. The other is Vision by Kawase Naomi, starring French film goddess Juliette Binoche, which I have already seen earlier this year. Kawase is one of my favorite directors by the way, and Vision is a master piece, although probably not to everyone’s taste, due to the very new age-like spiritualism dominating this movie.

Murder mystery
Red Snow is Kai’s debut as solo director (she co-directed two other movies) and she is clearly influenced by Kawase. Scenes in which overwhelming nature play the main part, long scenes of craftsmen plying their trade (ceramic painting, in this case) and silent moody scenes are vintage Kawase and on top of that one of the main roles is played by Nagase Masatoshi, who featured in Kawase’s Vision, in Radiance and in An, where he held his own against the great late Kiki Kirin.

Kai is no Kawase and her film is flawed, but it has numerous great shots and scenes full of tension and atmosphere, and the story, a noirish murder mystery, is intriguing and thrilling. Alle the actors are superb but in the difference between the ways Kai and Kawase channel Nagases intimidating screen presence it becomes very clear who is the most confident director. Which is not strange, because Kawase has so much more experience.

One thing in this movie is truly outstanding and that is the sound. There’s a masterful choreography of silence and sound in this movie, providing an extra layer, almost telling a story of its own. The soundtrack by Yas-Kaz is also a treat. Listen to it here.

After a fantastic lunch at Asian Glories (dim-sum, Peking duck, soup of turbot, scallop with glass noodles and deliciously seasoned quail) we saw the best movie of the bunch, Hard-Core by Yamashita Nobuhiro. I’ve seen a lot of movies by Yamashita and Linda, Linda, Linda, about a school girl band working their asses off getting the famous Blue Hearts song right, is one of the most touching movies I ever saw. Every time I see that Ramones cameo I get a lump in my throat. My eyes get moist just thinking about it.

Three guys and a robot
Hard-Core, based on a manga, is an amazingly intricate film and the more surreal it becomes, the more real it gets. Very good acting by Yamada Takayuki (very intense, Marlon Brando meets Mishima Yukio) and Arakawa Yoshiyoshi (Japan’s favorite moron, kind of a crossing between Zippy the Pinhead and Curley from the Three Stooges). It’s about three guys and a robot searching for some shogun’s hidden gold, a children’s adventure for grownups, multi-layered, very funny, very grim, very tragic, about friendship, love, sex, loneliness, loyalty and being marginalised by society. Yamashita always shows a profound understanding of human nature in his films. I hope this gets a wider release in The Netherlands sometime soon.

I am keeping this short because I think the lesser you know about this movie, the greater the impact will be. Just trust me and see it if you have the chance, next Saturday in Kriterion, Amsterdam.

My time is limited. So a lot of movies on the program I had to let go, but this coming weekend I’ll have another chance in Amsterdam, a city I am usually not eager to spend my free time in, by the way. I am really sorry to have missed the chance to see The Chaplain by Kyokaishi, starring the late great Osugi Ren, a miscalculation on my part, because I was hoping to catch that in Amsterdam, where it will not show.

I’m hoping to catch Only the Cat Knows by Kobayashi Shotaro and The Fable by Eguchi Kan on Thursday, Jesus by Okuyama Hiroshi on Saturday (I’m sorry I won’t be able to see Sabu’s new film Jam later that evening) and Every Day a Good Day with the great Kirin Kiki, her last movie before she died, on Sunday. Kawase Naomi’s Vision I already saw and heartily recommend. I also saw Chrysanthemum and the Guillotine and Samurai Marathon, both movies I enjoyed very much (Chrysanthemum more than Marathon), despite their flaws (Chrysanthemum crams too many themes in one movie and when I finally grasped where exactly Marathon was heading the movie was over).